Thousands of dollars lower than any other option — T. M.

“Thousands of dollars lower than any other option.”

I investigated a number of options for refacing my kitchen cabinets and found KitchenReface along the way. I ordered some sample doors from several vendors and was very impressed with the quality of KitchenReface’s samples. Moreover, the total cost of materials from KitchenReface to re-veneer the original frames and replace twenty-nine doors and four drawer fronts (around $2,200) was thousands of dollars lower than any other option.

So, I placed my order in early December 2013, and all the materials arrived on the 26th! Everything was very carefully packed, and I was delighted to see that each door was precisely the dimension I had ordered. One door and one PSA sheet were slightly damaged, but the company very promptly and cheerfully replaced them.

I have had quite a lot of experience remodeling over the years, and I did not expect to be done in just a few days. In fact, it took me about three weeks of more or less full-time work to finish the project because I spent a lot of time getting the PSA veneer just right and because the kitchen has a lot of corners and angles as well as two lazy-susan cabinets, which are a little tricky to do. But the kitchen now looks bright and fresh, and my wife is very happy with it!

I would certainly recommend KitchenReface to anyone interested in doing such a project. It does take time, but if one works carefully, the result will be well worth the effort. 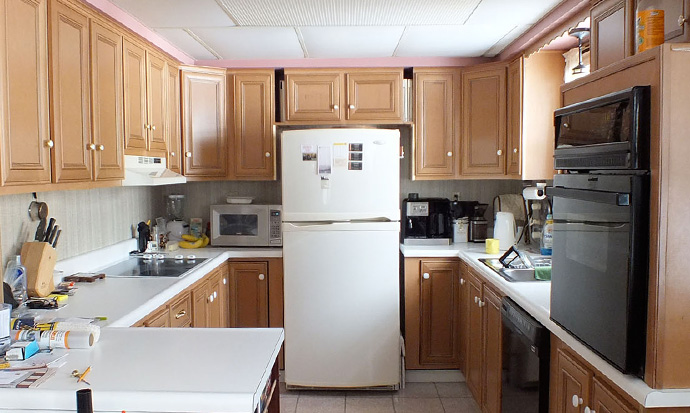 This entry was posted in Testimonials. Bookmark the permalink.